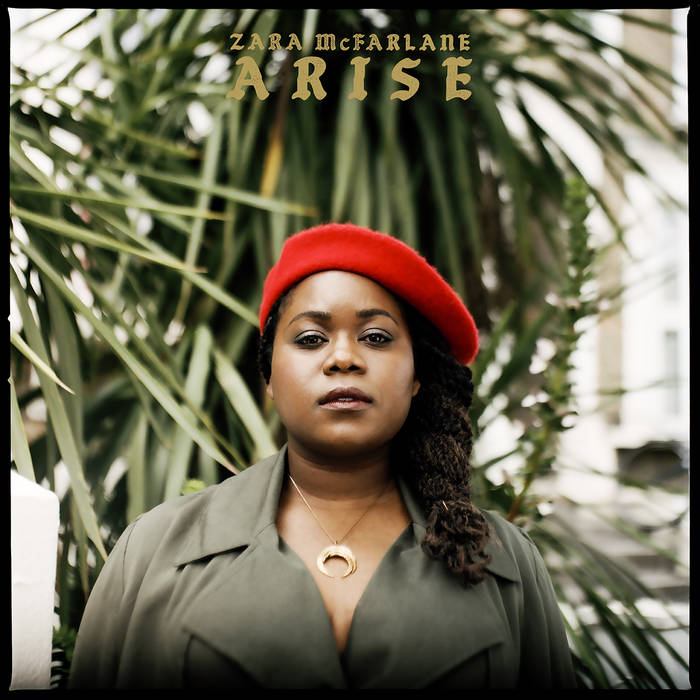 Alison Fort Great to see a new album from Zara!

Tracing the musical heritage of the Caribbean, Zara McFarlane explores her interconnected vision of the diaspora.

On Arise, Zara McFarlane returns to a buoyant UK jazz scene with a head-turning third album. Exploring the musical possibilities of British-Jamaican identity, it’s a cultural exchange that’s born of London’s current musical climate. Released on Gilles Peterson’s Brownswood Recordings, it sees her working with much-feted drummer and producer Moses Boyd. Both rose through London’s Tomorrow’s Warriors programme, a finishing school for many young vanguards of the live, ascendant jazz scene springing up across the UK capital. Sharing Caribbean family heritages, it’s a product of their joint exploration of the meeting points between jazz and the rhythms of Jamaica; reggae, Kumina, calypso and nyabinghi, shaded with hints of the psychedelic.

Zara’s breakthrough 2012 track, a jazz cover of Junior Murvin’s ‘Police and Thieves’, provided a jumping off point to further explore the blurred, colourful territory in between jazz and roots-reggae. Covering Nora Dean’s ‘Peace Begins Within’, she breathes a syncopated groove into a soulful, reggae classic. A beautifully poised version of the Congos’ Fisherman teases out the poignant lyrical content of the 1977 classic. Meanwhile new, original compositions from Zara, like ‘Fussin' and Fightin’’ and ‘Freedom Chain’, combine a deep, reverberating bass with a steady-stepping roots rhythm.

Album opener ‘Ode To Kumina’ touches on the kumina tradition brought to Jamaica by indentured labourers from The Congo in the later part of the 19th Century. Part of Zara’s deeper research into her Caribbean heritage, it alludes to a deep-rooted culture encompassing music, dance and religion. Similarly, ‘Silhouette’ arose from that same research; in this case, however, it was about how records and documents often get lost in Jamaica. “It kind of came out of the idea of black history and blackness and feeling like you're trying to find yourself,” she explains. “Trying to be proud of your history and who you are. And never forgetting the things that brought you to where you are.”

Alongside drummer Moses Boyd on production, the album features a stellar line up of some of the key players on the London scene Binker Golding on tenor sax, Peter Edwards on piano, Shirley Tetteh on guitar, Nathaniel Cross on Trombone and an unusually restrained turn on Clarinet from Shabaka Hutchings. Shared between all of them is a tendency to find the common points between different musical ilks: from US hard bop jazz, to dub and London-rooted hybrids and permutations, the band on Arise reflect the musical diversity of their home. Boosted by new platforms, like East London showcase Church of Sound and a newly-refreshed Jazz Café, the record surfs the momentum currently propelling jazz-influenced music in the UK.

For Zara, Jamaica’s musical legacy is deeply intertwined with her sense of the place itself. Spending whole summers in the hills of Jamaica, it’s the sounds and smells which she most vividly associates with her stays there. In particular the local sound systems which were an everyday feature of the local area; be it in shops or bars, each of the small local shacks would have a sound system where they’d play music through the day and evening.

“From where my nan used to live, in Cauldwell there's a sound system almost opposite her house,” she says. “So you feel this boom of the bass, and then all the smells of the hills and the greenery of Hanover. When you land in Jamaica and you go to walk off of the plane, the heat and the smells hit you and it feels like home away from home for me. When I hear Jamaican music, these are the senses that come.”

Zara McFarlane’s debut album, 2011’s Until Tomorrow, came garlanded with rave reviews and a MOBO award nomination, and heralded a major new talent in the world of British jazz. The follow-up, also recorded for Gilles Peterson’s Brownswood Recordings label, is a more ambitious collection that draws from many more influences: from the deep spiritual jazz of Pharoah Sanders to dub and reggae. ... more

Bandcamp Daily  your guide to the world of Bandcamp

Benji B talks about his new compilation ‘Deviation Classics’